Book Review: Drawing Down the Moon 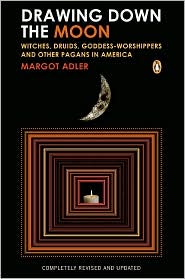 I just finished reading Drawing Down the Moon: Witches, Druids, Goddess-Worshippers and other Pagans in America by Margot Adler. It was recommended to me as a source that thoroughly covered 20th century NeoPaganism in the USA (and somewhat in Britain too actually), and that is definitely accurate. There is a LOT of information there, and  I think this book is an excellent resource for dispelling myths about witches and other pagans.

Nearly half of the book is devoted to Wicca and it's many traditions, but since that is one of the most common (if not the most common) Pagan religion, it seems appropriate to give it the space, and the author certainly did not ignore Druidism, Asatru/Heathenism (Nordic), the Church of the Eternal Source (Egyptian), the Church of All Worlds (inspired by Heinlein's and Rand's books), as well as several smaller traditions that I had not ever heard of before.

I appreciated the authors objectivity. While she occasionally mentioned things that indicated her own spiritual practices, she never suggested that any path was better than another, or even that paganism was necessarily better than better known mainstream religions. She just wrote about her experiences and observations of people and groups, and shared things she had learned via interviews and questionnaires. I read the third edition (2005), and the author has added and edited information in each edition to reflect the changing landscape of paganism over the 35 years since the first edition.
In places I found the book to be very dense and could only read slowly, but other portions had more of a "can't put it down" feeling. I am not sure if that was because of different content in various parts (historical exposition vs recounting a wedding ceremony for example), or if it was because some topics interested me more than others. Regardless, I was glad to be able to renew it twice, because it did take me a while to finish the book.

One of the most valuable things this book has is an extensive appendix with references, websites, and contact information of dozens (maybe hundreds) of pagan organizations around the country. The second appendix has several sample rituals (in addition to the few described within the text), one of which I adapted and shared here on Mother Wheel. While the text of the book discusses the basics of paganism, the appendices make a helpful resource for someone who is interested in actually practicing paganism.
Shared by Jenni