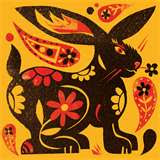 My husband and children are Vietnamese. Chinese New Year, or new year to us, is a great time of celebration in our home.

When I decided to join the other women authoring this blog I didn't know much of anything about the moon, its phases or the Pagan wheel of the year. I felt a bit like I had jumped in the deep end of the pool without my floaties! Since then I have been reading every recommended book I can get my hands on - I must have 5 inter-library loan requests out! I never thought my study of the moon cycles would tie into a holiday we already celebrate.

Before there were calendars there were no 'years' and no 'new year'. The calendar is the longest lasting invention of any culture. The first calendar was lunar. In approximately 2637 B.C. after watching the moon's changing appearance, or phases, the Yellow Emperor Huang di and his scientists developed a "system of cyclical characters." In this system, ten days equaled one week, and three weeks made one month. A day paired a sumbol from the Ten Heavenly Stems with one from the Twelve Earthly Branches. Six repetitions of the Ten Stems and five of the Twelve Branches completed the cyle, a total of sixty days. These cycles were used to name the years during the first century. Later during the 1711 century B.C. the Shang dynasty made a lunar calendar based on months - the time between one new moon to the next. Each month was between twenty-nine and thirty days long.

One legend created in ancient China to help explain the mysteries of the universe tells of Heng-O and the twelve chinese moons. People thought there were twelve moons just as there were twelve months in one year. They also thought there were ten suns, just as there were ten days in the Chinese week. The mother of the twelve moons was also the mother of the ten suns. At the beginning of each month, the mother, Heng-O washed her children in a lake at the far western side of the world. Then each moon made of water, one after the other, traveled in a chariot for a monthlong journey to reach the opposite, east side of the world. There, the suns started their journey.

During the Shang dynasty the perpetual calendar was invented. By measuring the length of shadows during the year with a gnomon -the raised part of a sundial -and the length of each day using a water clock, astronomers were able to note the longest and shortest days of the year revealing two solstices and two equinoxes.
*The Chinese alendar is solar and lunar. It is based on the positions of the sun and the moon.
*The new moon is the first day of a lunar month.
*The chinese New Year falls between Jan 21 and Feb 20, the second new moon after the winter solstice.

Chinese New Year 2011, year of the Rabbit is February 3rd (there is some discussion that due to double months and moons in the Chinese calendar the new year doesn't actually begin until Friday the 4th). So we will have our new year's eve celebrations and our new moon observance all in one week!

Traditions our family has:
*We eat out at our favorite Asian resturaunt
*Each kid gets their own red envelope with as many dollars as they have years. 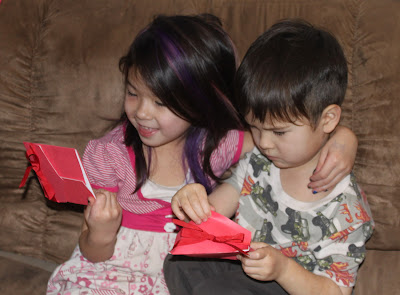 Activities I am adding this year:
*Ancestral Altar - Pictures of deceased relatives nearby. On New Year's Eve, flowers, food and candles are placed on the altar for the ancestors to show respect to them and to unify the family.
*Haircuts for the boys before the new year so as not to cut away good fortune during the year.
*Lantern Festival with friends - begins the first full moon of the Chinese New Year, February 18 (some celebrate the 15th day of the month).
*Door God posters - from the legend of two generals who served the emperor and protected his doorway at night. We will use a Goddess and God symbol. A goblet and an athame most likely on either side of our door.

Happy New Year and Blessed Be!
Shared by Maria