Reclaiming my Womanhood (a ritual)

I recently had an experience where I felt that my womanhood had been lost--or at least lessened. The specifics aren't relevant, because I think a lot of women have experiences or situations where they feel that they are broken, or damaged, or suppressed in their womanhood. Perhaps infertility or a miscarriage; perhaps a traumatic birth experience or a cesarean-section or hysterectomy; perhaps some form of abuse, or mental illness, or physical disability...or maybe something else altogether. Whatever it is, I think most women have times when they feel that they are less of a woman than they wish to be.
When I had my experience, I was down for a couple of days before I realized that this one specific thing was the source of my grief. Once I identified it, I was able to talk with a couple of friends about it, and that helped at the time, but after the conversations ended I came back off the high and was grieving again. I realized that if I was going to feel like a whole woman again, I would need to take matters into my own hands.

First I determined what it was that I felt my womanhood was missing, and then I tried to find a way to refill that hole. In my case, it related to my fertility and my potential for procreation. Since the womb is one of the things that makes a woman distinct and separate from a man, (and since many of our situations tend to be fertility/birth related), I think the womb is a reasonable point of focus for this ritual. Depending on your specific situation, you may choose another part of yourself.

I chose a time when most of my family was away from home so I could be alone.

I chose a song that resonated with me in the moment. It is on the angsty side, and unfortunately the title is a word that many find offensive, but the song felt appropriate to me in the moment so I went with it anyway. Perhaps you'll be able to think of something gentler...or perhaps not. But the song I pulled up on youtube to play during my ritual was Meredith Brooks' "Bi*ch" I chose it because it talks about many aspects of being a woman, and about being ok with all of them. The chorus says "I'm a little bit of everything all rolled into one. I'm a bi***. I'm a lover. I'm a child. I'm a mother. I'm a sinner. I'm a saint. I do not feel ashamed." Later lyrics also mention being a goddess and an angel. ☺

While the song played (on repeat), I sat in the sunshine, pulled up my shirt and rolled down my pants, and exposed my belly--my womb--to the light. I took deep breaths, drawing the clean air all the way deep into my uterus, and then exhaling all the negativity I had been feeling. I rubbed my belly, observing the roundness, sagging, and stretch marks that my pregnancies have left. After a little while of making peace with my body, I got out my henna and drew a goddess symbol below my navel, approximately over my uterus. (A pen or marker would have sufficed in the absence of henna.) 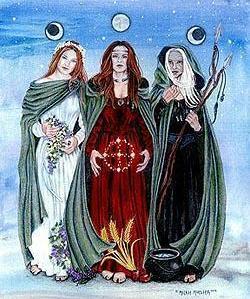 For those unfamiliar with the symbolism, the symbol for the Goddess shows the moon in its three phases (waxing, full, and waning) symbolizing the three stages of womanhood (maiden, mother, and wisewoman). It is a reminder that each aspect is as important as the others, and that all--especially all in combination--can define womanhood.


I continued to sit in the light while my henna set up. I made a mental list of the many womanly attributes that I maintain--in spite of the loss I had been feeling--and continued with my deep breathing until I felt better. 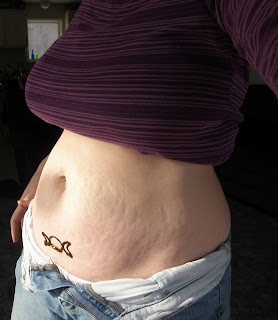 The henna will last a couple of weeks, so for that time I will have an ongoing physical reminder of my reclaimed womanhood.
Shared by Jenni