Our Feast
I made fruit braids, since one of the traditional foods is a fertility bread with spices or sweetmeats (fruit and nuts) inside. I had meant to just make one loaf, but, shall we say, errors were made! So I ended up making a huge batch with three loaves. One had my (homemade) apricot marmalade, and it was too runny and as you can see the braid opened up in the oven. The second one had a cranberry filling, and the third was chopped almonds with butter and cinnamon.
Bottom center are the fruit braid slices, to the right are the oatcakes, and in the center is a fruit plate. Barely visible in the bowl at the top left is cottage cheese with tomatoes and chives in it--that was our 'dairy' and also 'fresh herbs' from the official holiday foods list. On the other side of the fruit plate is fried zucchini and steamed artichokes (which aren't traditional, but they sounded good). In the crockpot was beef chuck, which also just sounded good to us.
My 4 year old wound ribbons around our candle wreath, and we got some potted flowers but had to take them off the table for dinner because there wasn't room. 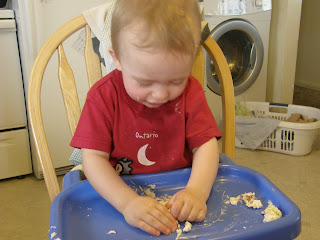 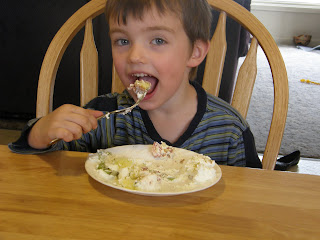 The Battle between Winter and Summer
Shared by Jenni