Wicca: A guide for the Solitary Practitioner by Scott Cunningham 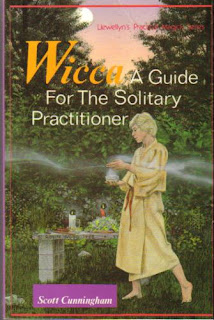 Scott Cunningham has written several books about Wicca, ranging from herb guides to books about divination or ritual, and probably the most popular, Wicca: A Guide for the Solitary Practitioner which is a little bit introduction to what Wicca is, and mostly a guide for how to practice Wicca if you don't have anyone around to teach you in person.

Obviously we here at Mother Wheel are not practicing Wicca, but Wiccan guidebooks are helpful because their belief and worship system is quite similar to ours, centered primarily in belief in the God and Goddess (whom we know as Heavenly Father and Heavenly Mother), and observations of the Wheel of the Year and Lunar Esbats. Furthermore, as Cunningham says, there is no right or wrong way for a wiccan to worship or celebrate; each practitioner should consider what is meaningful to them and then develop their own rituals and traditions. Because of this, the book is most definitely a guide (to creating your own worship and ritual), but not so much a "here's what to do" book. In that, I feel it was a great resource for an LDS observer of the Wheel of the Year, Lunar cycles, and/or the Divine Feminine.

Cunningham does give many suggestions about how to develop rituals and deepen personal interpretations of spirituality. He writes at length about various symbols and tools which are commonly used for rituals; but also continually reminds the reader that is an open spiritual path in which there is no 'right way' to do things, but simply just the way that feel best to the practitioner. The book also includes his personal "Book of Shadows" (which is the title for any wiccan collection of rituals and spells), so there are many ideas to help a beginner with developing their own things.

One part of the book that particularly stuck out to me was in the beginning, where he talked about his experiences with shamans from various parts of the world. He explains that shamans found spirituality and power "...through ecstasy--alternate states of consciousness in which they communed with the forces of the universe. Early shamans first attained this state through the use of such 'tools' as fasts, thirsts, self-infliction of pain, ingestion of hallucinogenic substances, concentration, and so on....
"Today, Wicca has dropped the ordeals of pain and the use of hallucinogens in favor of chanting, meditation, concentration, visualization, music, dance, invocation, and ritual drama. With these spiritual tools, the Wicca achieve a state of ritual consciousness similar to those attained by the most brutal shamanic ordeals.
"I deliberately used the term 'alternate states of consciousness.' Such changed consciousness states aren't unnatural, but are a deviation from the 'normal' waking consciousness. Wicca teaches that nature includes a broad spectrum of mental and spiritual states of which most of us are ignorant. Effective ritual enables us to slip into such states, allowing communication and communion with the Goddess and God."
I really liked that explanation of the purpose of ritual--to bring us out of our mundane 'normal' mind and into a state of heightened awareness of and 'communication and communion with' our Heavenly Parents. I also appreciated the point that there are many ways to reach that state of awareness, and that the key is not to do a certain thing (such as a specific ritual) so much as it is to do whatever thing it is that brings me, personally, to the relevant mental state.
Shared by Jenni