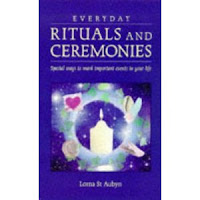 "Today, ritual has almost disappeared from Western society... In many people's lives the only important milestone or rite to be observed is their funeral. Other major events of all kinds remain unacknowledged; no cycles are defined. Instead of celebrating beginnings and endings and transition points, we drift through the years, dragging behind us tatters of the past which should have been unequivocally buried. This in term prevents us from stepping into the future whole heartedly.
"The return to performing rituals is one way to reinstate a belief in the connectedness of all life. In today's society many people feel a sense of separation and isolation. For many there is a nagging sense that there must be something more to life. Rituals can help us to see we are part of something larger, a part of a living breathing earth. They can give us a feeling of unity and a sense of security and support in an increasingly difficult world. We can again begin to sense the sacredness in the ordinary which can add the depth and meaning so often missing from our lives."

This book is not so much one for reading straight through as it is a reference book for specific rituals. I did not read every page, I just skimmed through it and read a few of the specific rituals. It is not a religious ritual book, although the rituals do usually connect to Nature/Mother Earth or the elements in some way. It would be very easy to adapt these rituals to your own needs and beliefs.
Honestly it was not my favorite ritual book, because so much is already laid out that it feels like it takes more effort to adapt these rituals than it would to just invent one from scratch. Most of the rituals are fairly complex, and involve lots of props and steps. However, for someone who wanted something to start with, this might be a good resource book.
The thing I appreciated the most was the kinds of things this book had rituals for. For example, most of us recognize the validity of doing a ritual for the birth or death of a person, but isn't it also appropriate to formally recognize the death of a beloved family pet? Other changes, such as starting a new job, having surgery, or even just responding to a public event (political or social) can be valid reasons for holding a ritual.

Here is a list of some of the rituals in the book: