Heavenly Mother in Young Women's: What you hadn't noticed about the personal progress program

The LDS young women's organization (for girls aged 12-18) has something called Personal Progress, which is a program in which the girls complete a series of experiences (small) and projects (larger) designed to help them increase their faith and skills. The experiences and projects are in 'values' (categories) such as faith, individual worth, good works, and integrity. The booklet has a list of suggestions, but girls can also design their own experiences. When a girl has completed the designated things, she is awarded a medallion.

When I was a young woman, there were 42 experiences and 4 big projects (20-30 hours each), and it had to be completed over the course of all six years, because the girl could not start on the next portion until her next birthday. At the end of every two years, if a girl had completed everything for those years she could earn one of the class medallions. If she completed everything, she could earn this "Young Womanhood" medallion --->
A pretty lady standing by some flowers. (Here I could make all sorts of comments about symbolism of juxtaposing a girl with flowers, or the apparent focus on the outward appearance of the girl depicted...but I don't really want to. I will just note that this is the old medallion, the one I got, but which very few of my peers did.)

A few years ago they revamped the program, and now there are 48 experiences and 8 (10 hr) projects--6 experiences and 1 project in each of the 8 value areas. They also took out the timetable, so girls are able to work through all of the goals at their own pace, no waiting for birthdays (and losing momentum). They have done away with the intermediate medallions, and changed the final medallion (more on that in a moment!) and they have now added honor bees. 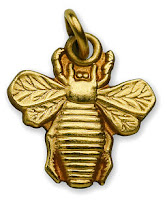 An honor bee is a charm which the girl can earn after she has earned her medallion. She can actually earn as many as three bees, and does so by doing more goals, or helping other girls complete their experiences and projects.
It's a lovely idea, the extra charms for going the extra mile, but what I particularly noticed was that it's a BEE. You know, a symbol of Mother Goddess.


Better still is the new medallion. It is a combination of several symbols: the temple, the beehive, the laurel wreath, the rose, and the ruby. Young women are divided into three classes: Beehives (12-13), Mia Maids (14-15) and Laurels (16-17). Bees and beehives are a symbol often found in the church as a symbol of industry. The symbol for Mia Maids is a rose (something about purity or beauty I suspect, though I'm not certain). Laurels are named for laurel wreaths, as the ancient greeks used to crown champions. The temple is where a young woman wants to go, and a ruby reminds her of Proverbs 31, which says that a virtuous woman's worth is far above rubies.
However
The temple is a symbol of Heavenly Mother.
So is the bee.
So is the ruby.
And trees (like laurels) and flowers (like roses) are often seen as symbols of the Divine Feminine as well.
In other words, this new medallion positively GLOWS with Heavenly Mother. It is FULL of Her. She is everywhere. When these girls earn and wear this medallion, it is not just a symbol that they have completed a set of projects (though that is notable): it is a symbol of their potential to become like their Heavenly Mother. To become goddesses like She is.

Now we just need to teach the girls what it is that they are wearing.
Shared by Jenni