Book Review: The Dance of the Dissident Daughter

(cross-posted on my blog) 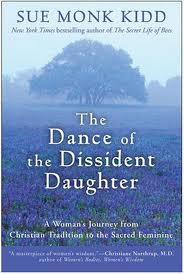 There is a great review of this book at With Your Mutual Approbation, so I won't repeat what she said, (you should just go read that review too!) but I will add some thoughts of my own as well as a few quotes.

The book has four sections, chronicling Kidd's journey "from christian tradition to the sacred feminine." The sections are Awakening, Initiation, Grounding, and Empowerment. The book is a little like a diary, or a documentary of her personal journey of discovery. She has excerpts from her journal, she talks about art she created, dreams she had, rituals she did, and her conversations and research during the time (it covers several years). She draws from MANY sources, some of which clicked for me more than others. Art, history, theologians, psychology, mythology, and feminism combine in her own personal melting pot of putting in all the pieces and creating a new self and a new view of the world.

I think the greatest point of this book is that it approaches the idea of the Divine Feminine from a Christian perspective. In other words, it does not discount Christianity, it merely broadens the view.

I feel like I have been or am doing some similar things (pulling from many sources to make a new paradigm), however my own feelings and conclusions aren't all the same as hers. I think she makes some good points though. In the first half or so of "Awakening" I thought wow, this could be me writing this; but then in the later part of that section, plus most of "Initiation," I felt like I really didn't relate. In those parts she was pushing back against the repression she felt in the patriarchal society, particularly the patriarchal church. The LDS church is pretty patriarchal in practice, but it is NOT so much in doctrine (ie, we already have a belief in  Heavenly Mother), so I don't feel nearly so repressed or disenfranchised as Kidd did. As the book got into the "Grounding" part I started relating again though, and really liked many of her conclusions.

Kidd's experiences combined feminism with spirituality, and while there is a lot of room for overlap, I feel that there is also lots of room for separation. So I took the intellectual stimulation and lapped it up as food for thought...but without feeling any obligation to agree with any particular part. I was intrigued by her interpretations and insights in some areas, and more or less apathetic about others. In the long run though, I found it difficult to put the book down, and would heartily recommend it to anyone (especially any woman, but really any one) who is open to thinking about things from a broader perspective.


Here are a few quotes or ideas from the book that I particularly liked:

"I often went to Catholic mass or Eucharist at the Episcopal church, nourished by the symbol and power of this profound feeding ritual. It never occurred to me how odd it was that women, who have presided over the domain of food and feeding for thousands of years, were historically and routinely barred from presiding over it in a spiritual context. And when the priest held out the host and said, "This is my body, given for you," not once did I recognize that it is women in the act of breastfeeding who most truly embody those words and who are also the most excluded from ritually saying them" (15).

An LDS acquaintance recently made the point that women literally shed their blood for others in menstruation, the marriage bed, and childbirth. (Those, along with lactation and menopause, are the five pagan "women's blood mysteries" and are considered sacred, which I think is appropriate. How wonderful would it be to raise daughters to think of their bleeding as sacred rather than as a curse?!)
In a later part of the book, Kidd mentions that the phrase "El Shaddai" (used in the Old Testament as a name for God) has usually been translated as "the almighty," but in fact 'shad' is also a Hebrew word for breast, and the 'ai' ending is feminine. So another reasonable interpretation is "the breasted one," or nurturing mother. And how many times in scripture does God speak of gathering us "as a hen gathereth her chickens under her wing"? Indeed, I must agree with Ms Kidd that the Old Testament is actually FULL of positive female references.

"The question then occurred to me: Well, [if] the Divine is ultimately formless and genderless, what's the big deal? Why all this bother?
"The bother is because we have no other way of speaking about the Absolute. We need forms and images. Without them we have no way of relating to the Divine. Symbol and image create a universal spiritual language. It's the language the soul understands.
"And yet--and here's the crux--the images that have pervaded our speech, thought, and feeling about the Divine have told us the Divine is exclusively male. They have told us there is only one form and that form is masculine. Indeed, the image, language, and metaphor of God as male has been used so exclusively, for so long, that most people seem to believe that God is male.
"How many times had I heard someone say "God is not male, He is spirit"?" (137-140).

The author is writing from a mainstream Christian perspective, and of course LDS theology does not quite align with this--we believe that God the Father IS male--but we also believe in the existence of God's wife, a Mother and Goddess, His partner and equal. And so, while I would word the issue differently, I still have to ask--if this is a true thing, why won't we talk about it?

I particularly liked a part where the author wrote about Matroyshka dolls (russian nesting dolls). She had a dream where a wisewoman archetype (who appeared in a lot of her dreams) gave her a doll, and showed her essentially the wisewoman (goddess) within herself. Later she learned that 'matroyshka' means 'mother' and she was struck by the idea of a mother within a mother within a mother. I was thinking about that, and how a woman's eggs are inside her when she is born. In other words, when a woman is pregnant with a daughter, it is not only her daughter but also her granddaughters who are within her. Just like the mother doll. And if you go back through enough mothers, we come all the way to Eve, and to Heavenly Mother. She talked about sitting in the "Great Lap" of Heavenly Mother, just as a child would sit in the lap of an earthly mother or grandmother.

Kidd concludes with some thoughts about why we benefit from having female authority as well as male, and it is because the two sexes simply do things differently. Men are naturally inclined to create hierarchical pyramids, whereas women are more likely to create weblike networks. Men compete, women build teams. It is not that one way is superior or inferior, it is that they both have their place, and neither should be pushed out by the other. As women, living in a predominately male-organized culture, we benefit from finding or creating female authority patterns in our lives, because we understand and relate to them better. Just as I felt a greater understanding of the atonement when I thought of being a mother sending my son to die (rather than the oft-repeated "God sent his Son"), so too we can grow closer to God the Father (as well as God the Mother) by acknowledging the presence--and differences--of each.

"I think women understand that
we create change
as we live out the experiences of our souls
in the common acts of life"
(222).
Shared by Jenni